StorPool has the honor to once again be nominated for the prestigious storage awards by Storage Magazine.

Yes, this year StorPool is nominated for not one, but four awards: 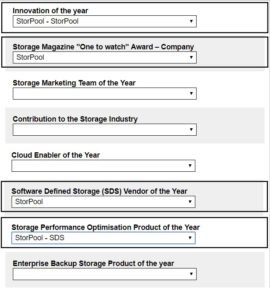 This is the second year in a row, that StorPool is nominated to for the “One to Watch – Company” award. This is such an honor for the entire company and its team, recognition for the hard work  and the sleepless nights. StorPool is a young company, which is thriving to be the best at what it is doing and those nominations show that we are on the right way to accomplish that.

To vote for StorPool in any of the above mentioned four categories, you can go on the Storage Magazine awards website and vote now. The voting will be open until 6th June, so make sure you don’t miss it. The award ceremony will be hold on 14th June.

Storage Magazine is a British publication, launched in 2001. It focuses on topics around the IT storage, as well as the newest trends on the market. The magazine informs companies about the latest updates in their business area, and how that is going to affect them and their work. Every year Storage Magazine gives away awards – the most prestigious awards in the IT world, acknowledging the best products, services and people  of the year. The attendees are more than 400 from all around the industry. Last year around 12,000 readers voted and over 60,000 votes were cast.