“Chip Chat Conversations in the Cloud” is Intel’s weekly podcast with IT leaders, driving the future of a software-defined infrastructure based data center. Earlier this week aired the latest episode with Boyan Ivanov, CEO and Co-Founder of StorPool.

In the converstation you can hear the story behind StorPool from one of its co-founders himself. It all started in 2011 with the hope of helping companies, building public or private cloud, that were struggling with their storage solution.

“If you want to make an impact on the storage of the 21st century, you have to do something, 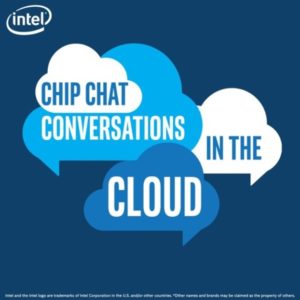 that is better than anything that has existed”, says Boyan. So StorPool had no other option, but to build the fastest and the most robust block storage, available on the market. Which is, additionally, incredibly resource and cost efficient. It took a long time. It wasn’t an easy task, but today StorPool has a product, far exceeding anything else out there – it’s highly available, secure, fast, and scalable. It is the best storage solution for the end-user.

Just some years ago, people were looking to have separate components in their data center – compute, network, and storage. However, today the borders are merging. Those components are becoming one unified infrastructure. Some people are going for a hyper converged solution, others – for solutions, empowered by software defined technologies. StorPool helps companies build a cloud, starting from 2/3 TB, that can easily scale in the TB range, without worrying about scalability or migration issues. The unified infrastructure makes everything so much simpler, allowing companies to focus on what really matters – developing their business.

StorPool is a solution, designed for the 21st century. OpenStack and OpenNebula are just some of the integrations that StorPool has, along with OnApp, CloudStack, etc. Additionally, almost every integration, that the company has made, has been done through its API. That way it is achived automation in the storage layer. Interesting about StorPool is that they write drivers for every single project they embark on. For example, they have their own data store in the case of OpenNebula. In other words, this is a unique software, that exposes all the functionality, available on the cloud management platform. It  exposes it to the storage system, but it can still be managed through Horizon, OpenStack and so on.

With the growing amount of data, the demand for faster storage also grows. And companies don’t even realize how important the speed of their storage is. Therefore, StorPool’s mission is to eliminate the latency and increase the IOPS, but also to do it in the most cost efficient way possible.

The future of StorPool and Intel

Almost all StorPool’s customers are currently using Intel CPU-s or SDS-s. So it’s safe to say, Intel is the preferred platform, based not only on costs, but also on performance.

StorPool is one of the very early adopters of any new software technologies, not only of storage ones. Thus, the company is excited and is looking forward to all the innovations, happening right now in the IT world. And talking about pushing the boundaries and having some unique capabilities, Intel is the company, that comes to mind.

The future according to StorPool

In the near future most workloads will be running on standard servers, which are managed by software. In the last year the SDS has become more mainstream and the prediction is that its popularity will just continue to grow.“SDS is the future” as Boyan says in the interview. When it comes to StorPool, Boyan has big plans for future – becoming the number one storage software company on the market. And by the looks of it, StorPool is on its way.

This is StorPool’s second time being a guest on the show. In the last episode, Boyan Krosnov, Co-Founder and Chief of Product at StorPool, talked about the storage landscape. He clarified the difference between capacity-driven and latency-driven storage systems. The bottom line is that, when you are buying a storage system, focus on a low-latency architecture. This will deliver qualitatively better results for your users and applications.

Build an Efficient, Scalable Cloud with StorPool and Intel

with Boyan Ivanov, CEO and Co-Founder of StorPool